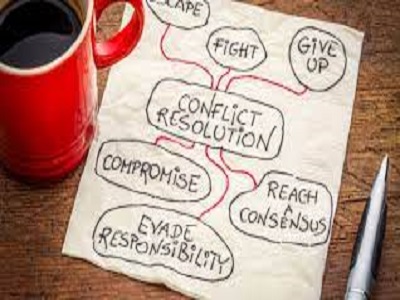 Conflicts in relationships are inevitable. Conflicts are not a problem, but actually, how one handles them decides the quality of the relationship. The way one handles relationship issues can bring people together or tear them apart.

Next time you have a conflict with your partner, try inculcating these tips for a positive outcome.

Often in relationships, we believe that we are listening, but during an argument, we only listen to answer and defend ourselves after the person stops talking. Rather than really hearing the other person’s perspective, there is preoccupation as to what you want to say in response, which turns out more like a competition than a conversation. We forget to listen to understand the other person. Try noticing whether you do this in a discussion. While you may not completely agree with their point of view, it’s crucial to reason out and listen to why they feel that way.

If you have a conflict of opinions with someone, try to have a conversation, not a debate.  Do not start reacting and defending yourself angrily or to win or attack. Effective communication goes both ways. It may get complicated, but try listening to what the other person has to say. Just listen, reflect, and then answer. Through this, the understanding improves, and your partner will be willing to listen to you patiently.

Rather than indulging in sentences like, “You are the reason things are messed up right now,” replace statements with “I” and make them about yourself, your feelings, and what your take is. For example, “I feel frustrated when I’m in this situation.”

It feels less accusatory and will try to normalise things. It will not lead to fights, sparks less defensiveness, and helps the other person understand your perspective rather than feeling attacked.

Before talking about any issue with the partner, try to process your feelings on the particular subject and calm yourself. One should try taking a stroll or listening to relaxing music. This will help in taking more control of emotions and communicating well.

Instead of just thinking about trying to "win" the argument, one should look into finding the solutions. Sometimes it would require making compromises or coming up with new solutions after brainstorming. They should focus on being effective rather than being person-centred i.e. one person getting what they want at the other’s expense.

Micro positive expressions are widely known as involuntary facial expressions. They occur almost within 1/25th of a second. They actually reflect a person’s true emotions.

It could include quick rolling of eyes or scrunched up eyebrows. All these micro negative behaviours show your level of interest in the conversation.

Some micro positive expressions include authentic smiles, face nods, and sometimes leaning in. This will help the partner feel more open to communicating with you.

At the end of the day, what is very crucial for improving communication is by working on building a safe space between the person you are in conversation with. If one doesn’t feel safe with the person whom he/she is talking to, defensiveness will come in. It's very important to work things out with the other person. Being defensive or vulnerable, won't be good for the long run. The reason why conflicts escalate is lack of communication or improper communication.

Take the first step towards bettering your relationship and take professional help if the need arises to thrive in relationships. Guidance can be provided in discovering patterns and creating a secure and thriving relationship. Don’t just fall in love, but instead rise in love.